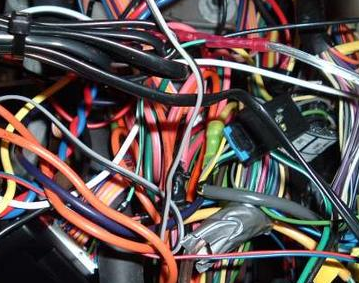 On this last day of my respite this week, I’ll just share some of the stories that have caught my eye even though I’m not at full attention. I’ll be back on Monday.

Almost one million fake electronic parts from China have been found in US military aircraft. A report by the US Senate Armed Services committee found 1,800 individual cases of counterfeit electronic parts being used in military hardware…

More than 70% of the parts were eventually traced to China, after passing through a “complex supply chain”, often involving multiple vendors.

…According to one witness quoted in the report, factories of up to 15,000 people have been set up “for the purpose of counterfeiting”.Failure of any one of these parts could put national security at risk, the report said…

Detroit, whose 139 square miles contain 60 percent fewer residents than in 1950, will try to nudge them into a smaller living space by eliminating almost half its streetlights.

As it is, 40 percent of the 88,000 streetlights are broken and the city, whose finances are to be overseen by an appointed board, can’t afford to fix them. Mayor Dave Bing’s plan would create an authority to borrow $160 million to upgrade and reduce the number of streetlights to 46,000. Maintenance would be contracted out, saving the city $10 million a year.

Other U.S. cities have gone partially dark to save money, among them Colorado Springs; Santa Rosa, California; and Rockford, Illinois. Detroit’s plan goes further: It would leave sparsely populated swaths unlit in a community of 713,000 that covers more area than Boston, Buffalo and San Francisco combined. Vacant property and parks account for 37 square miles (96 square kilometers), according to city planners.

“You have to identify those neighborhoods where you want to concentrate your population,” said Chris Brown, Detroit’s chief operating officer. “We’re not going to light distressed areas like we light other areas.”…

The co-owner of a U.S. defense contractor that specializes in Information Operations admitted on Thursday to trying to discredit two USA Today journalists with an online smear campaign.

“I take full responsibility for having some of the discussion forums opened and reproducing their previously published USA TODAY articles on them,” Camille Chidiac, the minority owner of Leonie Industries and its former president, said in a statement.

“I recognize and deeply regret that my actions have caused concerns for Leonie and the U.S. military. This was never my intention. As an immediate corrective action, I am in the process of completely divesting my remaining minority ownership from Leonie.”

Tom Vanden Brook and Ray Locker reported in February on “dubious, costly” propaganda campaigns carried out by contractors in Iraq and Afghanistan. The reporters noted that Leonie Industries was awarded a contract from the Department of Defense, even though the company’s owners owed at least $4 million in federal taxes.

Leonie Industries is a relatively small company that specializes in cyber operations, intelligence analysis, psychological operations, and counter-IED explosives operations. The company said that due to the owner’s financial troubles, they were unable to fulfill their “personal tax obligations on time,” but have since been “faithfully paying their tax liabilities through installment plans.”

After reporting on the company, the two journalists were targeted by a online disinformation campaign apparently meant to destroy their reputation. Fake Twitter and Facebook accounts were created in their name, along with websites that purported to be owned and operated by them. Comments quickly sprung up on message boards, Yahoo! answers, Wikipedia, and blogs criticizing the two reporters’ investigation of Leonie Industries. Some comments even suggested the two journalists worked for the Taliban….

Grover’s grip may be loosening.

A small but increasingly vocal group of freshman Republicans are publicly rejecting the idea they are beholden to Grover Norquist’s Americans for Tax Reform pledge for their entire congressional careers.

One such member, Scott Rigell of Virginia, has openly rejected the pledge, explaining on his website that it would prevent Congress in some cases from eliminating corporate loopholes or government subsidies because those changes would have to be revenue-neutral. The math, he said, just doesn’t make sense.

Rep. Allen West (R-Fla.) scoffed at the idea the pledge was some sort of blood oath. A number of other offices of freshman members told POLITICO their bosses had sworn oaths to do what was best for their districts, not Americans for Tax Reform.

“I signed that thing in the desert of Afghanistan,” West said in an interview. “I got home and they wanted me to sign again during my campaign, and I wouldn’t, and Grover started yelling at my campaign manager. Grover is a nice guy, but I think he’s a little misguided.”

“I don’t care if he has my name on his website, it’s meaningless,” West added. “I think my voting record speaks for itself.”

The tax pledge has long been a litmus test for any conservative who wants to be taken seriously in a Republican primary. That some newcomers are repudiating it lends support to critics who argue the document is more valuable as a campaign tool than a guidepost for governing.

Norquist insists he’s not bothered by any hedging on the part of the freshmen.

“I don’t lie awake at night thinking any of these characters are going to vote for a tax increase,” Norquist said. “The leadership is not going to bring it up. All but six Republicans in the House have signed the pledge and they have a 25-vote margin. It’s a moot point.”

But the slip in devotion, however slight, is notable considering how strong a hold the pledge has had over the GOP.

A handful of other freshman members privately told POLITICO they had been struggling with their ATR pledge signatures, as they felt it had become clear the pledge was a hindrance to certain tax reforms they’d like to see happen.

Some members aren’t backing off the pledge, but when asked about it, their offices didn’t glow with praise for Norquist.